In this post, I’ll share some code to bulk index Rails models into Elasticsearch using Sidekiq. Sidekiq uses a Redis queue to allow for asyncronous jobs. I used JRuby to take advantage of all my CPU cores.

I installed MySQL, Elasticsearch, and Redis via Homebrew. Install as necessary:

I setup a basic Rails project with a single model.

Before bulk indexing the data into Elasticsearch, I needed to populate the Thing model with data (~1 million records). In line with this post I decided to use Sidekiq to populate the model.

Start Sidekiq worker. Add “–verbose” flag to help troubleshoot issues. I started a few workers until all my CPU cores were pegged at 100%.

Progress can be seen via Sidekiq/Sinatra monitor: http://localhost:9494

At this point we’re ready to bulk index data into Elasticsearch. Add gems to Gemfile:

Created another rake task to load all the Thing [primary keys] and index to Elasticsearch. edit file: lib/tasks/sidekiq.rake

Execute the rake task to index the model data into Elasticsearch:

Screenshot of Sinatra/Sidekiq monitor with all CPUs pegged: 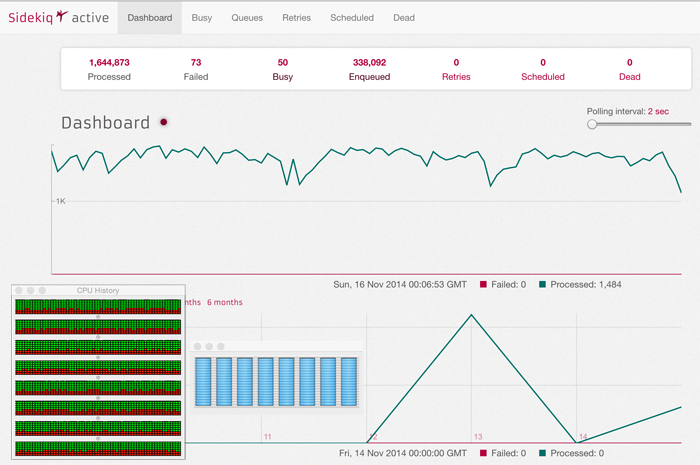