In this article I’ll explain how I recently setup a web server to host both 1. Ruby on Rails via Phusion Passenger (mod_rails), and 2. PHP via Apache (mod_php). Nginx will sit in front and proxy requests (by hostname) to Apache, or serve them directly via Phusion. Here’s a rough diagram: 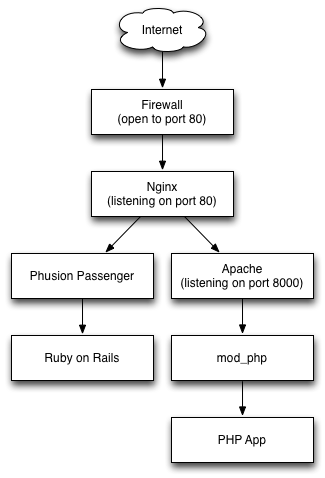 I started with a fresh (minimal) installation of Ubuntu 10.04 LTS. Here we go:

Set Apache to listen on port 8000. Note: nginx will listen on 80 and proxy requests to Apache.

For sake of this tutorial, I created a simple PHP script.

And created an Apache vhost for the above script. New/example file: /etc/apache2/sites-available/php.eric.vm

Enabled the new conf file by adding a symlink:

At this point I was able to reach my php script by browsing to http://php.eric.vm:8000

Here all the steps I executed on the shell

For this tutorial I created a (very) simple Rails app.

(as usual) if I had made changes to my models, I would have run:

To test my rails development environment:

The generic controller message was shown:

To run the rails app in production mode, I edited the file: config/environments/production.rb, and made this change:

And as necessary, migrate production database:

At this point the rails app should be able to run in production mode using:

(if not, check log/production.log for errors)

Although nginx is now installed, you’ll need a init script. I simply copied the one listed here: http://techoctave.com/c7/posts/16-how-to-host-a-rails-app-with-phusion-passenger-for-nginx, and pasted it here: /etc/init.d/nginx

The last part of this tutorial involves making changes to the nginx conf file: /opt/nginx/conf/nginx.conf

For my server I set nginx to run as the same user/group as Apache, and increased the number of worker processes (per # of CPU):

Within the http directive, I added a server directive for my rails app:

And an upstream and server directive for Apache:

The above configuration changes allow nginx to listen on port 80, and based on hostname: 1. server the rails app (nginx > passenger > rails); or 2. proxy pass the request to Apache (nginx > apache > php).